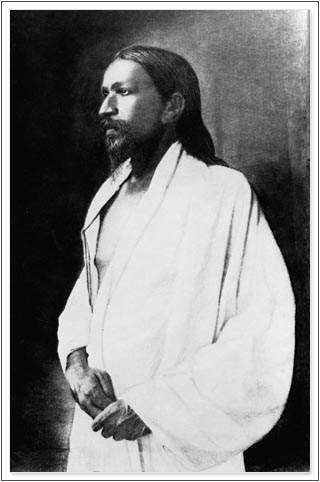 The soul or psyche is immutable only in the sense that it contains all the possibilities of the Divine within it, but it has to evolve them and in its evolution it assumes the form of a developing psychic individual evolving in the manifestation the individual Prakriti and taking part in the evolution. It is the spark of the Divine Fire that grows behind the mind, vital and physical by means of the psychic being until it is able to transform the Prakriti of Ignorance into a Prakriti of Knowledge. This evolving psychic being is not therefore at any time all that the soul or essential psychic existence bears within it; it temporalises and individualises what is eternal in potentiality, transcendent in essence, in this projection of the spirit.

The central being is the being which presides over the different births one after the other, but is itself unborn, for it does not descend into the being but is above it – it holds together the mental, vital and physical being and all the various parts of the personality and it controls the life either through the mental being and the mental thought and will or through the psychic, whichever may happen to be most in front or most powerful in nature. If it does not exercise its control, then the consciousness is in great disorder and every part of the personality acts for itself so that there is no coherence in the thought, feeling or action.

The psychic is not above but behind – its seat is behind the heart, its power is not knowledge but an essential or spiritual feeling – it has the clearest sense of the Truth and a sort of inherent perception of it which is of the nature of soul-perception and soul-feeling. It is our inmost being and supports all the others, mental, vital, physical, but it is also much veiled by them and has to act upon them as an influence rather than by its sovereign right of direct action; its direct action becomes normal and preponderant only at a high stage of development or by yoga. It is not the psychic being which, you feel, gives you the intuitions of things to be or warns you against the results of certain actions; that is some part of the inner being, sometimes the inner mental, sometimes the inner vital, sometimes, it may be, the inner or subtle physical Purusha. The inner being – inner mind, inner vital, inner or subtle physical – knows much that is unknown to the outer mind, the outer vital, the outer physical, for it is in a more direct contact with the secret forces of Nature. The psychic is the inmost being of all; a perception of truth which is inherent in the deepest substance of the consciousness, a sense of the good, true, beautiful, the Divine, is its privilege.

The central being – the Jivatman which is not born nor evolves but presides over the individual birth and evolution – puts forward a representative of himself on each plane of the consciousness. On the mental plane it is the true mental being, manomaya purusa, on the vital plane the true vital being, prānamaya purusa, on the physical plane the true physical being, annamaya purusa. Each being, therefore is, so long as the Ignorance lasts, centred round his mental, vital or physical Purusha, according to the plane on which he predominantly lives, and that is to him his central being. But the true representative all the time is concealed behind the mind, vital and physical – it is the psychic, our inmost being.

When the inmost knowledge begins to come, we become aware of the psychic being within us and it comes forward and leads the sadhana. We become aware also of the Jivatman, the undivided Self or Spirit above the manifestation of which the psychic is the representative here.