Sri Aurobindo - Power of Knowledge and Will 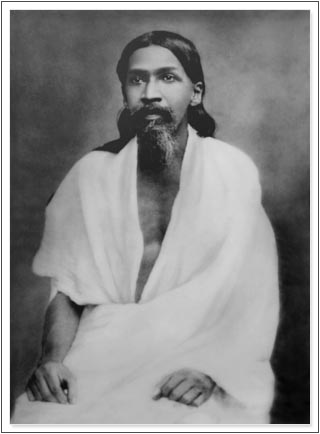 In the ignorance of my mind, I ask of these steps of the Gods that are set within. The all-knowing Gods have taken the Infant of a year and they have woven about him seven threads to make this weft.

But infinite Existence, Consciousness and Bliss need not throw themselves out into apparent being at all or, doing so, it would not be cosmic being, but simply an infinity of figures without fixed order or relation, if they did not hold or develop and bring out from themselves this fourth term of Supermind, of the divine Gnosis. There must be in every cosmos a power of Knowledge and Will which out of infinite potentiality fixes determined relations, develops the result out of the seed, rolls out the mighty rhythms of cosmic Law and views and governs the worlds as their immortal and infinite Seer and Ruler. This power indeed is nothing else than Sachchidananda Himself; it creates nothing which is not in its own self-existence, and for that reason all cosmic and real Law is a thing not imposed from outside, but from within, all development is self-development, all seed and result are seed of a Truth of things and result of that seed determined out of its potentialities. For the same reason no Law is absolute, because only the infinite is absolute, and everything contains within itself endless potentialities quite beyond its determined form and course, which are only determined through a self-limitation by Idea proceeding from an infinite liberty within. This power of self-limitation is necessarily inherent in the boundless All-Existent. The Infinite would not be the Infinite if it could not assume a manifold finiteness; the Absolute would not be the Absolute if it were denied in knowledge and power and will and manifestation of being a boundless capacity of self-determination. This Supermind then is the Truth or Real-Idea, inherent in all cosmic force and existence, which is necessary, itself remaining infinite, to determine and combine and uphold relation and order and the great lines of the manifestation. In the language of the Vedic Rishis, as infinite Existence, Consciousness and Bliss are the three highest and hidden Names of the Nameless, so this Supermind is the fourth Name — fourth to That in its descent, fourth to us in our ascension.

But Mind, Life and Matter, the lower trilogy, are also indispensable to all cosmic being, not necessarily in the form or with the action and conditions which we know upon earth or in this material universe, but in some kind of action, however luminous, however puissant, however subtle. For Mind is essentially that faculty of Supermind which measures and limits, which fixes a particular centre and views from that the cosmic movement and its interactions. Granted that in a particular world, plane or cosmic arrangement, mind need not be limited, or rather that the being who uses mind as a subordinate faculty need not be incapable of seeing things from other centres or standpoints or even from the real Centre of all or in the vastness of a universal selfdiffusion, still if he is not capable of fixing himself normally in his own firm standpoint for certain purposes of the divine activity, if there is only the universal self-diffusion or only infinite centres without some determining or freely limiting action for each, then there is no cosmos but only a Being musing within Himself infinitely as a creator or poet may muse freely, not plastically, before he proceeds to the determining work of creation. Such a state must exist somewhere in the infinite scale of existence, but it is not what we understand by a cosmos. Whatever order there may be in it, must be a sort of unfixed, unbinding order such as Supermind might evolve before it had proceeded to the work of fixed development, measurement and interaction of relations. For that measurement and interaction Mind is necessary, though it need not be aware of itself as anything but a subordinate action of Supermind nor develop the interaction of relations on the basis of a self-imprisoned egoism such as we see active in terrestrial Nature.

ref. The Life Divine, Chapter XXVII - The Sevenfold Chord of Being, p.281