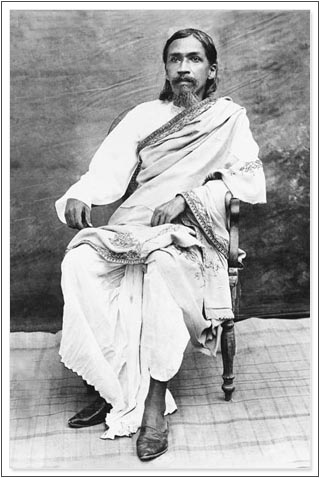 A perfect path of the Truth has come into being for our journey to the other shore beyond the darkness.

As we reach in our thought the line at which the evolution of mind into overmind passes over into an evolution of overmind into supermind, we are faced with a difficulty which amounts almost to an impossibility. For we are moved to seek for some precise idea, some clear mental description of the supramental or gnostic existence of which evolutionary Nature in the Ignorance is in travail; but by crossing this extreme line of sublimated mind the consciousness passes out of the sphere, exceeds the characteristic action and escapes from the grasp, of mental perception and knowledge. It is evident indeed that supramental nature must be a perfect integration and consummation of spiritual nature and experience: it would also contain in itself, by the very character of the evolutionary principle, though it would not be limited to that change, a total spiritualisation of mundane Nature; our world-experience would be taken up in this step of our evolution and, by a transformation of its parts of divinity, a creative rejection of its imperfections and disguises, reach some divine truth and plenitude. But these are general formulas and give us no precise idea of the change. Our normal perception or imagination or formulation of things spiritual and things mundane is mental, but in the gnostic change the evolution crosses a line beyond which there is a supreme and radical reversal of consciousness and the standards and forms of mental cognition are no longer sufficient: it is difficult for mental thought to understand or describe supramental nature.

Mental nature and mental thought are based on a consciousness of the finite; supramental nature is in its very grain a consciousness and power of the Infinite. Supramental Nature sees everything from the standpoint of oneness and regards all things, even the greatest multiplicity and diversity, even what are to the mind the strongest contradictions, in the light of that oneness; its will, ideas, feelings, sense are made of the stuff of oneness, its actions proceed upon that basis. Mental Nature, on the contrary, thinks, sees, wills, feels, senses with division as a starting-point and has only a constructed understanding of unity; even when it experiences oneness, it has to act from the oneness on a basis of limitation and difference. But the supramental, the divine life is a life of essential, spontaneous and inherent unity. It is impossible for the mind to forecast in detail what the supramental change must be in its parts of life action and outward behaviour or lay down for it what forms it shall create for the individual or the collective existence.

ref. The Life Divine, Chapter XXVII - The Gnostic Being, p.999